In two recent stories, Fox News exploited mothers whose lives have been directly affected by violence in order to further the anti-reform agenda. 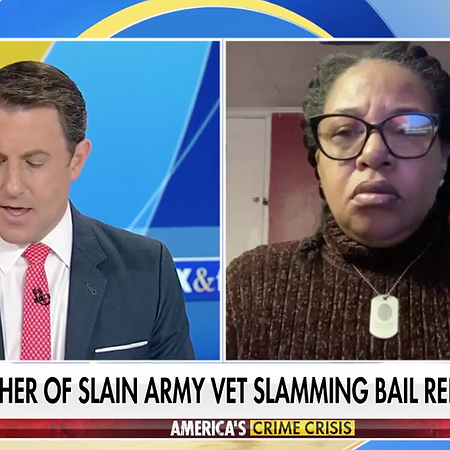 In two recent stories, Fox News exploited mothers whose lives have been directly affected by violence in order to further the anti-reform agenda. Fox repeated the women’s positions—which were based on the same misunderstandings of the law that have been aggressively and intentionally circulated by anti-reform groups—as fact.

In the first case recently used by Fox News, a mother was in the car with her 11-month-old daughter in the Bronx when a stray bullet struck the baby in the face. There is no evidence tying bail reform to this senseless gun violence. Moreover, no one alleged to be involved in this case has been identified. There is no available evidence that this person was free pre-trial at the time of the shooting, and this fact still would not implicate bail reform.

In the second story, a mother whose son was murdered in 2018 details the pain of her loss. She also states her mistaken belief that bail reform is to blame for one of the four people accused in his death being released. Based on publicly available records, this person who is now free pending trial was charged with a homicide in the first degree—an A felony, the highest level offense—and had high cash bail set in 2018. This charge was not implicated in bail reform. Records also reflect that bail was paid in 2019, prior to the implementation of reform.

Like concerns about gun violence generally, the grief and suffering of these families is incredibly real. But to use them to push false narratives is exploitative.

There is no evidence tying bail reform to gun violence. Simple possession of a loaded firearm—with no allegation that the gun has been used, fired, brandished, or otherwise involved in the commission of a crime, and with “loaded” requiring only that bullets are close by—is itself charged by prosecutors as a C violent felony that has always been eligible to have bail or even remand ordered. It is also not legal in New York to sell to a person who cannot legally possess a gun; New York State has some of the toughest gun control laws in the country, with New York City placing additional restrictions on top of those.

Importantly, the media has historically been far more hesitant to include the perspectives of victims of harm who oppose the anti-reform agenda. For example, in 2020, a Jewish woman was assaulted by a woman with mental illness who was also using anti-Semitic slurs. When the woman was sent to a hospital by a judge for mental health treatment, the outcry was immediate. Then-AG Bill Barr came to New York to undermine bail reform, and removed the woman from the hospital to charge her with a federal crime.

The victim of the assault, however, spoke forcefully about her wishes for the woman to receive help and treatment and against the use of her case as a talking point against reform. Despite being interviewed by the media, her perspective was originally omitted from coverage, including in places such as The New York Post.