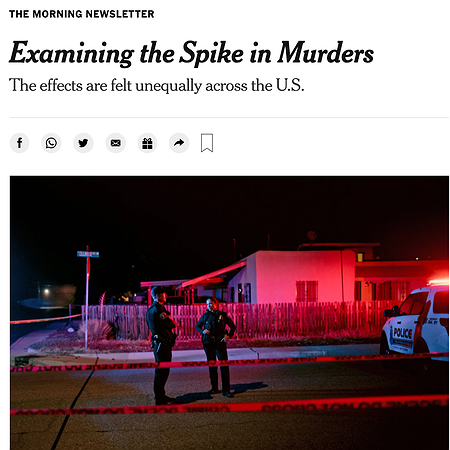 In a recent cover story, New York Times reporter German Lopez explored murder rates in the United States and asserted a widely-discredited connection between the racial justice protests in 2020 and increased homicides rates in 2021. Lopez nonetheless suggests that the protests in the wake of the police murder of George Floyd caused police to pull back, which caused murder rates to increase. There are several issues with his reporting.

Though this article does not state any claims as absolute, the author’s mere suggestion of connections between protests and murder rates and policing and safety carries weight, especially on the front page of one of the most widely read newspapers in the country. This article represents baseless and dangerous opinion, not objective or responsible reporting.

First, Lopez provides no citations to bolster the relationship he suggests exists between policing and murder rates. He couches the article in language of “may have” and “could have,” revealing these claims for what they are – baseless speculation. Second, he attempts to draw conclusions based on short-term crime data, despite the widely-recognized fact that it is irresponsible to speculate on short-term fluctuations in crime. Third, Lopez references “experts” but fails to identify who they are, expecting the reader to accept that whoever he has dubbed an expert is indeed one, and depriving his audience of the ability to consider the biases such perspectives might possess.

Lopez also states that there is “solid evidence” supporting that increased policing is a solution to crime, but fails to acknowledge the abundant studies that contradict this viewpoint. He quotes directly only from one source, John Roman, a researcher at the University of Chicago, who claims that “the short-term solutions around high violence are mainly punitive” but fails to provide any evidence to this effect. Lopez excludes the array of scientists who have the opposite view: that police make us less safe compared to reducing inequality and other investments.