Otsego District Attorney John Muehl, who has a history of opposing moves to lend oversight and transparency to prosecutorial practices, blamed his decision to retire rather than seek reelection on modest pre-trial reforms 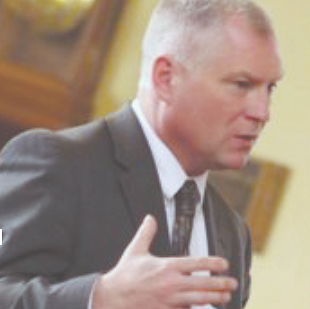 Otsego District Attorney John Muehl, who has a history of opposing moves to lend oversight and transparency to prosecutorial practices, blamed his decision to retire rather than seek reelection on a series of lies about modest pre-trial reforms implemented in 2020 in New York State. Below, we debunk each of his claims about the impact of reform:

Muehl: Discovery Reform made it “almost impossible for me to do my job.”

The Truth: Discovery reform just prevents prosecutors from keeping the accused in the dark.

Prior to reform, accused people who wanted to see the evidence against them had to wait for months and even years – often while incarcerated  Prosecutors frequently premised plea offers on the accused person’s waiver of their right to discovery, creating a coercive path out of jail or to the resolution of a case. The choice for many low-income people thus was between continued pretrial incarceration or being released with a criminal record. Eleventh-hour disclosures of massive amounts of evidence, also called trial-by-ambush, were common, eroding a person’s constitutional right to an effective defense by keeping attorneys in the dark while preparing trials and dispensing advice about pleas and often necessitating additional delays. The new statute simply required the sharing of evidence by default between the prosecution and defense on an accelerated timeline.

As public defender Sarah Lustbader wrote in 2020, “The only way that the new law would impose any new obligations is if prosecutors relied on people taking pleas without ever seeing the evidence against them, obviating the need to hand it over, in a significant number of cases. By claiming that there is any additional obligation, they are essentially admitting that they rely on coercing pleas from people who are blindfolded.” Muehl’s job has only been rendered “impossible” to the extent that this predatory practice was essential.

Muehl: “When we were in the middle of the big heroin epidemic I felt so horrible because you had all these people breaking into homes and stealing stuff. Thieves would pick people who were in Florida for the winter and, you know, these people have money and all of their jewelry. So much of this stuff was of sentimental value that can never be replaced and this S.O.B. has taken it from them. They’ll never get it back. And somehow we’re supposed to worry about the criminal?”

The Truth: Burglary of a dwelling in the second degree, as Muehl is describing here, is a bail-eligible charge.

Muehl is describing burglary of a dwelling in the second degree, which is actually a bail-eligible charge. He is also using the loss of valuables and sentimental items—a problem that bail reform neither caused nor is purported to solve—as an anecdotal iteration of the broader lie connecting bail reform to crime.

This is far from the first time Muehl has actively opposed measures to ensure fairness in the legal system. He mounted an opposition to the implementation of a Prosecutorial Oversight Commission, calling it “window dressing” and insisting that prosecutors already have enough oversight. In truth, prosecutorial misconduct is a leading cause of wrongful convictions. Muehl has actively been calling to repeal pre-trial reforms since their implementation. His claims are no more reasonable now, two years after implementation, than they were at the beginning of 2020 when he and his allies were making the same claims.

The Truth: Muehl falsely stated that the defense is not entitled to documents that they legally are entitled to receive.

Muehl also claimed that his office followed an open-file discovery policy voluntarily, which makes it even more unreasonable that he would now claim the law to be a burden. However, further statements cast some doubt on the validity of this prior practice. Muehl said, “I couldn’t give [defense] the grand jury minutes, although I would’ve if I could.” This is false. The defense has always been entitled to grand jury minutes—which are the transcript from grand jury proceedings in which a grand jury decides whether or not to indict a person at the request of a prosecutor—although sometimes a court may approve redactions of sensitive information. These transcripts can be the foundational element of the case, and are often one of the first items received by the defense as part of discovery disclosures in a felony matter. Muehl’s opposition is thus based – at least in part – on his misunderstanding of the law.

Muehl also said, “We urge the State to distinguish what is truly necessary for discovery.” However, everything required to be turned over today was considered discoverable information pre-reform. Prosecutors have always been required to turn over all discovery in their possession or within their control to be deemed in compliance with discovery requirements before trial. The change has been to the timeline in which this information must be disclosed. The discovery law addressed prosecutorial practices that let people languish for months and years, often in pre-trial detention, without any of the necessary information to make informed decisions about their cases.

Furthermore, the State via prosecutors, as its agents, determining what is “necessary” to the defense is a notion that has been addressed in New York case law well before discovery reform. It is a well-settled notion that the government is not in the best position—both because of divergent interests and due to unfamiliarity with the defense’s strategy and positions—to determine what may be relevant to a person’s defense.

Muehl: “Now we can’t get any confidential informants to work for us because we have to turn their name over to the defense right away.”

Prosecutors may request multiple exemptions to disclosure, including no disclosure until trial. Previous false attempts to tie harm to witnesses to reform have been unequivocally debunked. To the extent that the public believes this lie to be true, that is because people like Muehl have told them so. Any existing misapprehensions are either a result of the constant fearmongering about this statute and not the law itself or they are inherent to a person’s individual reticence to testify, which in no way implicates the 2020 change to the law.