Opponents of bail reform continue to push the lie, despite available evidence, that bail reform has caused widespread harm. 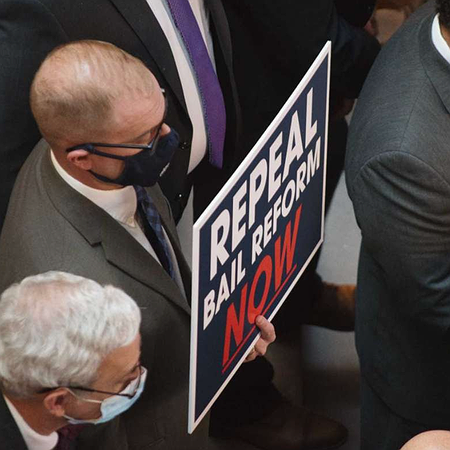 New York State released revised data on the rearrests of people who were free while awaiting trial, further confirming that bail reform has had no negative effect on public safety. The revised data halved the number of people previously listed as rearrested on charges classified as violent felonies while their cases were pending, with 98% of all people awaiting trial picking up no arrest charges for felonies that are classified as violent. The number of people arrested on any other charges was also reduced by more than 10%, from 30% to less than one in five.

Even as these numbers clearly support the position that bail reform does not lead to harm, precision is essential in citing these numbers. Critically, the 2% rearrest statistic in no way definitively represents people who have in fact committed violent acts while free pre-trial. In addition to being mere allegations, arrest charges are assigned by police and are not necessarily the charges that someone is ultimately prosecuted for. Arrest charges are frequently classified as more serious than what a person is ultimately officially charged with, as they are simply the most serious charges that an arresting officer, who fills out the arrest paperwork, thinks may fit the allegations. Moreover, arrest charge data includes cases that are dismissed or never prosecuted at all.  The numbers are therefore likely more favorable than they are presented here.

Police are able to make unilateral decisions about who to arrest and what to charge them with in police paperwork. Arrests alone have no evidence requirement, and every arrest is a policy choice about what laws to enforce and against whom. This data, much like crime rates kept and defined by police, can then be manipulated by the department that generates the data—which is openly hostile to reform. Through data-sharing models such as police-identified “Priority Offender” lists and arrest-alert systems, as well as via omnipresent police presence, police can track who is free while their charges are pending and may choose at any time to undermine their ability to remain at home simply be effectuating an arrest.

Additionally, many of the most common charges classified as “violent,” include no allegation of violence or harm whatsoever. For example, a person can be charged with Burglary in the Second Degree, a class-C violent felony with a mandatory minimum prison sentence of 3.5 years and maximum of 15 for taking a package from a residential building with no one present. Because a building vestiable is considered part of a “dwelling,” the crime is classified by law as “violent.” Similarly, a person can be charged with Robbery in the Second Degree (also a C-violent felony) even if the alleged victim is not even touched, let alone harmed, as long as the person allegedly stealing property is there with another. Lastly, simple gun possession, with no allegations of use is also classified as “violent.” The people approached, stopped, frisked, and ultimately arrested for these “violent” crimes are predominately Black or brown, living in overpoliced communities, and struggling with poverty.

The data is striking even and perhaps especially against this backdrop. Yet opponents of bail reform continue to push the lie, despite available evidence, that bail reform has caused widespread harm. The article does not quote proponents of the reform or formerly incarcerated people, but focuses on members such as Senate Minority Leader Rob Ortt. Now that the rearrest numbers further undermine his party’s regressive position on reform, Ortt has decided he does not need statistics to back his stance that tens of thousands more New Yorkers should be in jail while presumed innocent.