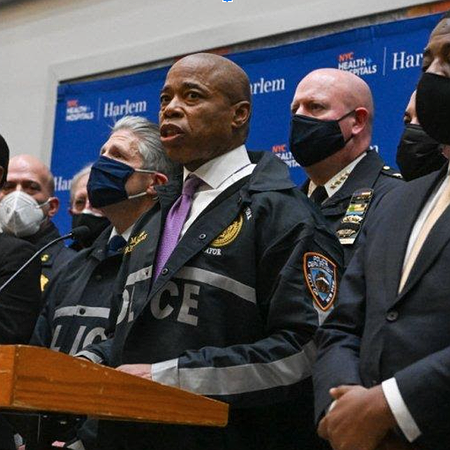 NYC Mayor Eric Adams unveiled his “Gun Violence Prevention Plan,” which falsely connected bail and discovery reform to gun violence, sought to undermine Raise the Age legislation, and falsely presented police and prosecutors as disempowered. In this Briefing, we outline why each of these policy responses reveal a misunderstanding of current law and policy in New York.

The Adams Plan: “[We] need to allow judges to consider a defendant’s dangerousness.”

The Truth: “Dangerousness” has never been a standard for setting bail in New York, and the state definitively declined to adopt it in the 1970s—and for good reason. Allowing a judge’s (or algorithm’s) prediction of “dangerousness” to serve as a basis for holding someone in jail while they are presumed innocent has clearly yielded racist results based on data from jurisdictions that allow this practice. Further, data shows no connection between bail reform and crime. For instance, 98% of people who are free pre-trial are not arrested for any violent felony charge. Even fewer are rearrested for crimes that involve any gun. As such, a determination of “dangerousness” would serve no legitimate public safety purpose, but would only increase the number of Black and brown New Yorkers who are jailed while presumed innocent.

The Adams Plan: “We urge the U.S. Attorneys’ Offices to expand their barriers for prosecution of a gun charge, and enforce out-of-state charges for guns that have been carried over state lines.”

The Truth: There are no significant “barriers” to bringing gun cases into the federal system or to cooperation between state prosecutors and the feds. Gun possession, for example, can be prosecuted in federal court. And in July, the U.S. Attorney for the Southern District of New York said it would participate in a cross-jurisdictional strike force to prosecute firearms trafficking, just two months after the DOJ announced a “Comprehensive Strategy for Reducing Violent Crime” emphasizing partnering with state and local law enforcement to combat gun violence. So, not only are federal weapons prosecutions already commonplace, the city’s prosecutors are also fully empowered to incarcerate people for gun possession, and the NYPD has never ceded its authority to make arrests for any reason, often touting its number of gun arrests or gun seizures as proof of the efficacy of policing.

The Adams Plan: “The voluminous requirements of the new discovery bill have jammed up too many cases.”

The Truth: This is a familiar refrain from New York prosecutors—and it’s false. New York lawmakers passed discovery reform to bring the state in line with the rest of the country in requiring prosecutors to share the information within their possession in a timely manner with people accused of crimes so that they and their attorney can make informed decisions and thoroughly prepare their case with all available information. This helped make New York law and practices more fair and just. Discovery reform ensures transparency and the protection of constitutional rights.

Prior to reform, the practice of delayed discovery by prosecutors prevented New Yorkers accused of crimes from getting an effective defense, interfered with their ability to prepare for court proceedings, and undermined their constitutional right to a speedy trial. Significant delays led to prolonged pretrial incarceration and made it more likely that a person would plead guilty out of desperation without knowing what evidence, if any, the prosecution had against them. Nearly every guilty plea prior to reform was entered without the person having the opportunity to review all the evidence against them. Discovery reform put an end to this practice.

The Adams Plan: “The Adams Administration advocates for an amended version [of Raise the Age] for gun arrests.”

The Truth: Raise the Age legislation that gave shared jurisdiction over certain charges against 16–17 year olds in New York to the family court system rather than exclusively to adult criminal court. Under Raise the Age, New York no longer automatically prosecutes 16 and 17-year-olds as adults. But these requirements are still often subject to either consent or opposition by the prosecution, particularly for felonies—such as gun possession—when charging 16 and 17 year olds. In his blueprint, Adams incorrectly states that prosecutors do not have the ability to oppose removing children’s cases from adult criminal court when they involve a gun; they can and they do, but they also often consent to these removals despite this ability in light of the law’s foundational premise.In his attack on Raise The Age, Adams also argues that minors should be punished for not speaking to police—specifically that teenagers accused of having a gun should lose the possibility of their case’s removal to family court, in recognition of their age and their ongoing cognitive development, if they do not tell police where they received the firearm. Not only do prosecutors already have the ability to oppose these removals, the suggestion that children should be punished for refusing to speak to the police is an affront to their constitutional rights.