Mayor Adams released an official statement that falsely presented the circumstances of a teen’s case and wrongly stated that he was only free because a judge lacked the authority to detain him due to bail reform. 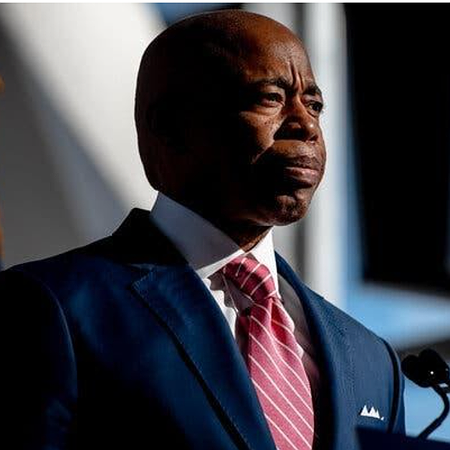 Mayor Adams released an official statement that falsely presented the circumstances of a teen’s case and wrongly stated that he was only free because a judge lacked the authority to detain him due to bail reform. The judge had a full slate of options regarding pretrial conditions for the teen, from release to electronic monitoring to remand (pre-trial detention with no bail amount, meaning that the person is detained until trial with no way out). The judge elected to set $250,000 cash bail; many New Yorkers awaiting trial would not be able to pay even a small fraction of this total. After nine days in jail with a bullet wound, the teen’s family was able to post bond (requiring a sort of downpayment for the full bail amount, in this case still a high amount at around $20,000). These funds were accepted after the family proved they were legally sourced by showing documentation at the order of the judge, also known as a “bail source hearing.”

Mayor Adams claimed that the illegality of the so-called “dangerousness” consideration in New York—which has been specifically prohibited for more than fifty years —prevented a judge from detaining a minor in a case where he was, in fact, detained by a judge pre-trial. This judge had a variety of options before him ranging from release to electronic monitoring to remand when assessing the case, but ultimately set bail at a high cash amount.

Mayor Adams has also misled the public about the facts of the underlying incident.

Facts of the Case

The facts of the teen’s case, to the extent they are seemingly agreed upon by both police and his attorney, are that he was shot when a gun he was carrying in his waistband accidentally discharged when he was tackled by police, the bullet hitting the teen in the groin before exiting his body and grazing a police officer’s leg. The teen’s lawyer maintains that the gun discharged when officers tackled the teen in retaliation for legally recording them with his cell phone, which the NYPD has a history of doing. The attorney also said that his prior case, for which he was on probation, came about because of a prop gun for a music video (the NYPD does have a dedicated hip hop unit and is known to target music videos for disruption).

Although the teen and an officer were both non-fatally injured in an accidental shooting, even according to police, Mayor Adams presents the case in starkly different terms. The Mayor’s official statement says that the teen was “accused of shooting at” an officer and is vague about the officer’s condition (he survived), which made the story particularly resonant in the week since two officers were in fact killed when responding to a man having a mental health crisis.

This is a striking example of a blatant lie used about bail reform and the ongoing attempt to shift blame from failed policies to unrelated legislation. This story is also – at base – about the exploitation of a minor, a constituent of Mayor Adams, whose story and image are now being shared and misrepresented widely in overtly racist, Willie Horton-style attacks on policy.

In New York State, “dangerousness” has never been a consideration for bail in New York, a position that was affirmed in the 1970s when the legislature declined to adopt it as a basis for pretrial incarceration. Jurisdictions that allow this predictive assessment of a person’s future behavior show clear data that this standard results in race-based outcomes. And while bail reform codified the use of “least restrictive means” to ensure return to court, this was always the constitutional standard in New York State. Nevertheless, hundreds of people are currently remanded—incarcerated with no hope of release pre-trial unless a judge changes their bail conditions—in New York jails. This is a power judges never lost when assessing serious charges to make bail determinations.

Gun laws generally are a significant subject of misinformation on bail reform. In New York, prosecutors charge possession of a loaded firearm as a C violent felony—despite no allegation that the gun was fired, brandished, or otherwise used in the commission of a crime, and with “loaded” meaning only that bullets are close by. These laws were not subject to any change in bail procedure under the new law, which only entitles people to release in the case of most misdemeanors and non-violent felonies, and only in some circumstances.

Cases where a person was struck by a bullet accidentally, as here, can elevate mere possession cases to a variety of higher felonies. Like simple possession, these more serious cases are also subject to bail or even remand.

Statement by The Adams Administration