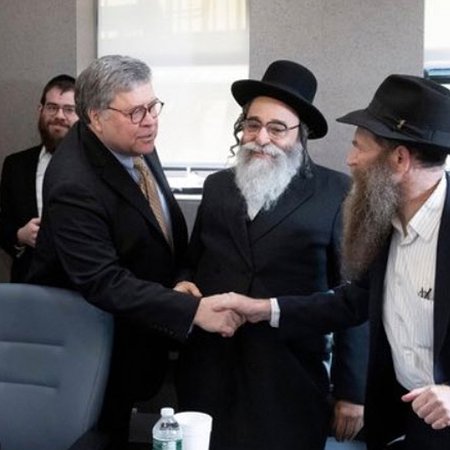 This New York Post Editorial Board repeats the lies and misinformation that have been circulating regarding two recent cases: the case of Tiffany Harris, accused of two misdemeanors, one for slapping Orthodox Jewish women in an alleged anti-Semitic attack, and the case of Gerod Woodberry, accused of multiple non-violent bank robberies.

A judge mandated Tiffany Harris to hospital treatment, where she has been since January 1. The new bail law continues to allow courts to order hospital treatment when a person is mentally ill. Pursuant to civil commitment proceedings, hospital officials are then able to keep someone in their care if they pose a danger to themselves or others. Ms. Harris has been quietly receiving the help she needs since her commitment, but the Trump Administration is using this case to pay lip service to ending anti-Semitism while it stokes bigoted sentiments to further its own far-right agenda. As discussed in the January 28, 2020 Debunk, the Attorney General is engaging in an opportunistic ploy and using federal funds to undermine the state’s bail reform laws, which have been in effect for just one month and did not prevent a judge from ordering Ms. Harris’ civil commitment. She may now be removed from treatment and subjected to the horrors of incarceration, which will only serve to worsen her psychological state and will not address the root causes of her actions. Politicians, prosecutors and police who disagree with bail reform are quick to use victims as political props, but only when it serves their narrative.

Coverage of the case so far has heavily relied on the word of A.G. Barr, a mass-incarceration enthusiast, lifelong prosecutor and rightwing stalwart now sword-and-shield for the Trump Administration. By eliminating the voice of victims that did not fit the pro-carceral narrative and other community leaders, media outlets such as the Post are engaging in a pattern that has become all-too-familiar since the rollout of bail reform: Adopt language from pro-carceral groups, provide little if any context, decline to mention that the people accused are presumed innocent or that they would have been released previously if they were wealthy, ignore the well-documented violence of jails and the impact on recidivism resulting from incarceration, and rely entirely on pro-carceral sources for information.

The case of Gerod Woodberry was also discussed by the New York Post in conjunction with Ms. Harris’ case. Similarly, the feds stepped in to charge Mr. Woodberry with a federal crime and incarcerate him. However, in their haste to score political points, they failed to see that Mr. Woodberry was eligible to have bail set on his state charges under the new statute, and was not actually released because of reform. This case was analyzed in the January 19, 2020 Debunk.

The Post article then falsely blames discovery reform for prosecutors being “unable to press charges.” This is a lie fully sourced from police and prosecutors in an effort to fearmonger the public. The discovery reform that went into effect on January 1 creates requirements that previously did not exist for prosecutors; these requirements brought New York’s discovery practice into step with states such as Texas and North Carolina. State prosecutors could previously withhold evidence until either the morning of trial or indefinitely if they secured a guilty plea. They are now required to turn over all evidence that is known to them. Some deadlines exist for the production of these materials, but the statute also provides a low bar to clear for the prosecutor to obtain an extension. While this is certainly more demanding than the previous policy that often required no effort to share evidence whatsoever, it in no way prevents prosecutors from charging people with crimes.

Elyse Maister, an Orthodox Jewish woman who was a victim of the attack by Ms. Harris, has spoken out against her incarceration. “I’ve been dismayed to watch politicians exploit what happened, to use it against bail reform. I want her to get treatment and not be subject to money bail,” Elyse Maister told the Daily News. “How to make society safer in the long run is to actually address people’s underlying mental health issues and needs. I think it’s better for everyone if people who need help receive it.” Ms. Maister also said, “I think the fear of the Orthodox community is very legitimate. You want to feel safe when walking the streets, but I feel like politicians are kind of exploiting these incidents to roll back bail reform.”

Link here for NY Post coverage falsely blaming criminal justice reform for Tiffany Harris’ release when she was committed in a hospital, Gerod Woodberry’s release when he could have been held on bail under the new statute, and prosecutors being “unable to press charges” due to discovery obligations.