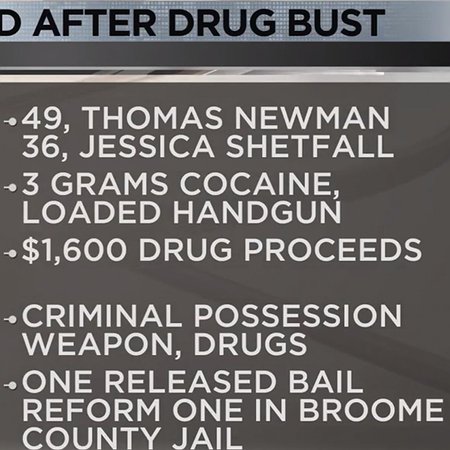 Thomas Newman and Jessica Sheftall were arrested in Binghamton, New York after a search warrant execution for narcotics yielded drugs and a firearm within the home. Ms. Sheftall was released; Mr. Newman was charged with a bail-eligible possession of a weapon charge and had bail set. The coverage states that Ms.Sheftall was released “under the new bail law,” but fails to provide any context as to whether she would have been a likely candidate for release prior to the new bail laws taking effect. Factors such as whether the home was hers, whether she was the target of the search warrant, her prior record if she has one, any history of court appearances, and why only Mr. Newman was charged with a bail-eligible offense are not discussed. The coverage provides absolutely no basis for the assertion that Ms. Sheftall would have been incarcerated for non-violent charges prior to January 1.

This article follows a familiar formula. It adopts language from pro-carceral groups, provides little if any context, declines to mention that the people accused are presumed innocent or that they would have been released previously if they were wealthy, ignores the well-documented violence of jails and the impact on recidivism resulting from incarceration, and relies entirely on the DA’s Office and police sources for information.

Link here for WBNG coverage of a woman who was released on non-violent charges following a search warrant that resulted in a man’s incarceration.